The industrial culture has made relevant contributions to humanity such as the sense of time or efficiency in production processes, but it has also implied some deficiencies that have manifested in a historical moment of change such as the current one. One of the most significant ones could be the difficulty of having a systemic focus when it comes to facing complex problems. In industrial societies, besides assuming that value lies in physical objects, we have gotten used to associate each problem to an instrument that solves it (maybe because of this sense of efficiency and time), which is clearly derived from the mechanism characteristic of the industrial revolution.  Machines and instruments solve problems. If we have a problem, we solve it with the appropriate instrument. For example, if we want to solve the issue of entrepreneurship, we create an incubator. 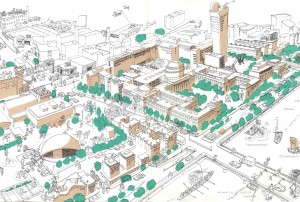 In the liquid society of today, problems are associated to systems that are more and more complex and simple (or simplistic) solutions, characteristic of the industrial culture, are no longer useful. To face the challenge to promote entrepreneurship in a territory, we must understand and be capable of operating in a complex entrepreneurial ecosystem formed by many elements that interact and change at great speed. We need other methodological tools and other new conceptual models.

In this sense, we can define as an “innovative ecosystem” as an environment constituted by various organisms and functions that are interrelated, which have as a goal the promotion of innovation and, based on it, the economic growth of a territory.

The existing innovative ecosystems in the world incorporate, in a more formalised or more spontaneous manner, territorial models such as the Quadruple helix (EU, RIS3, Guide 2012), the creative city model, aligned with what was presented by Richard Florida (2009), or sectorial clusters (Porter 1998, Pitelis, 2006 and Glaeser, 2013)

The innovative ecosystem represents a dynamic synthesis of the reference models, with some characteristics very related with the local history and culture and with some common elements. It is necessary to pay attention in today’s existing real cases in the world, and based on them, to try to make a synthesis of the success factors or distinctive elements that will allow us to understand its dynamic to be able to, afterwards, define policies and strategies that favour its development in a determined area.

Presently, the most dynamic cities from an economic point of view are the ones capable to develop urban environments that are configured as innovative ecosystems, where technology transfer towards the economic systems is naturally promoted. The result is the development of intensive of knowledge-intensive businesses, with a global vision and strong growth, which have a positive effect in the regional economies involved.

For the cases studies, in Barceló y Oliva (2002) an analysis of the existing innovative ecosystem in 20 countries was carried out, which included the cases of Boston, Los Angeles or New York (USA), Bangalore and Hyderabad (India), Hsinchu (Taiwan) an others from Korea and Japan, and specific districts in London, Stockholm, Helsinki and Cambridge in Europe. Afterwards, in Barceló and Guillot (Pirámide Editorial House, 2013), an emphasis was made in other areas such as as MIT’s in Boston and Seattle (both in the USA), Citytech in London, Espoo in Helsinki and the case of Berlin.

The analysis of the innovative ecosystem of the Massachusetts Institute of Technology (MIT) in Boston has resulted to be very interesting for Catalonia, both for its growing complexity as well as for their economic results. In the analysis stands out the presence of prominent factors such as the multiplicity of actors, its interaction and the fact that for each stage of the knowledge value chain (from basic and applied research to a stablished Company, passing through the commercial assessment, the creation of spin-offs and their growth) there are appropriate functions and services that support and facilitate the joint progress.

A study published by the prestigious Kauffman Foundation in February of 2009 indicates that thanks to this innovative ecosystem approximately 25.800 currently active companies would have been formed by ex MIT students, with an occupation of approximately 3.3 million employees and annual sales of US$2 billion, a number superior to the Spanish GDP, producing the equivalent to the eleventh economic power of the world.

It seems clear that with the goal of being able to define possible actions that allow us to advance in the configuration of authentic innovative ecosystems, a comparative analysis of these rich ecosystems can be of interest for Catalonia. In this regard, it is important to insist in the importance of the multiplicity of the agents involved in the ecosystem, which already exist in our country, too (universities, research centres, technology centres, science parks, business parks, public institutions with a pro-active vocation).  However, beyond the presence of these agents (and some limitations, in its operative design), the most relevant aspect so that we can speak of a true innovative ecosystem in our country is to define its functions in relationship with the surroundings and to accomplish an appropriate interaction between them.